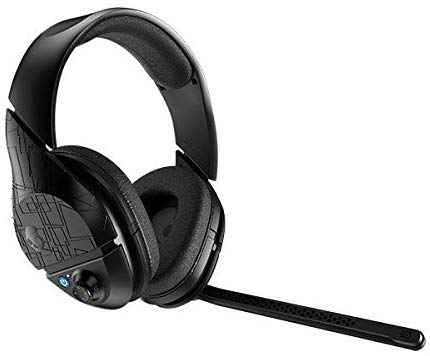 “Player 1 has joined your team “, probably not very welcome sight in online games. However, sometimes it is just a veteran player having fun and disguising him/herself as a noob for fun and jokes. Skullcandy’s new wireless headset PLYR1 falls into the same category. The true wolf in sheep-skin. A strong contender for the top position in price-for-value wireless headsets.

It almost sounds like a movie theatre when you put the Skullcandy PLYR1 on. The simulated 7.1 Surround Sound system and firm resounding bass make sure you could experience the vivid sounds to their fullest. The Surround Sound adds a lot to find out where the enemy is located.  You will hear from which direction are the gunshots and footsteps coming from much clearer and accurately than with gaming headsets without simulated 7.1

At critical decision-making moments, you would want to hear your teammates clearer. For this reason, Skullcandy has included one intuitive control to easily balance the volume between game sounds and voice chat. Check out for another best headphones.

The Skullcandy PLYR1 is completely wireless and uses the 2.4GHz spectrum to transmit audio data. You won’t have to worry about the annoying cords getting all messy or the critical parts of the cord wear off fast and make the headset useless. You can also leave the headset on when you leave the room but still want to hear what your teammates say and talk. There really are a big bunch of perks about wireless freedom.

The battery life is rather long compared to other wireless headsets. Easily 8-10 hours per one charge. You are able to recharge your set in stylish Transmitter Stand, featuring USB ports and TOSlink optical digital inputs.

The headset has three presets for different sound preferences.

These come in handy when you’re switching between different activities. Whether you’re watching an action movie or in the middle of an important CS: GO tournament, you can easily switch to another EQ mode through the GMX onboard mixer.

The boom microphone attached to the Skullcandy PLYR1 is noise canceling and is completely muted when held up vertically.

They’re plug-and-play on any of the gaming mediums. They will work well with PS3, PS4, XBOX ONE, Xbox 360 and PC.

It features cool and out of the box design like most of the Skullcandy’s products. They’re always innovative and you will stand out nicely with this headset. There are two color schemes available, black and white, although the white version currently seems to be a little bit more expensive than it’s black counterpart.

Most of the materials used are plastic, but it’s well engineered, sturdy and tight. It’s not that cheap bulky plastic featured in budget headsets. The PLYR1 gaming headset is durable and in proper use and maintenance along with battery life, will last years of consistent use.

When comparing PLYR1-s to Astro A50-s(see them here), which are almost 2x the price of PLYR1-s, they’re really a great deal. If you’re tired or not happy with Stereo sound headsets and look for a wireless solution for 7.1 Surround Sound headset, the Skullcandy PLYR1-sare one of the cheapest options from elite headset manufacturers.

Scroll back to top