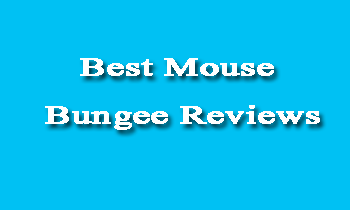 In real life, it’s a very cheap and easy way to boost up the consistency of your game. I’m sure every gamer has had a moment where everything seems to be going right but then your mouse cord gets stuck behind the table or the keyboard. Eliminating these situations and giving the mouse a wireless feel is the main purpose of the mouse bungee.

Over time they have also evolved a lot and the newer models are more than just a bungee. They provide illumination to the table, they have extra USB ports and they’re just pretty to look at. When considering their low price its a sure buy for most gamers who have done some research on them. I’m going to save you the trouble of researching and deliver you the best mouse bungee review.

The CM Storm Skorpion mouse bungee also has futuristic scorpion design as you can guess by its name. The dimensions are 5.9 x 5.1 x 3.3 inches and it weighs 12 ounces. It won’t slide on the table thanks to its heavy iron core and rubber foot pads no matter how crazy the situation is in game. It’s also possible to disassemble the bungee to increase portability. But obviously, the most important part of a bungee is its neck and head. The neck is made of rubber which has tons of benefits when compared to the regular spring bungees. Rubber allows it to bend in each direction which doesn’t create some sort of unnatural tension on the cord. Rubber also has another benefit in this bungee. The head is flexible which makes it compatible with all mice.you may also love Runescape mouse.

The Thermaltake Galeru mouse bungee has that scorpion design, which everyone prefers. The product’s dimensions are 6 x 1.5 x 7  inches and it weighs 1 pound. All the physical attributes are perfectly calculated and the bungee sits firmly on the table, no matter the intensity of use. There’s also a Thermaltake logo on the exterior, giving it an expensive look. The head of the bungee is detachable, held in place by a strong magnet.

Definitely, the best feature about this bungee is that it works with all mice and there hasn’t been a user review yet to say otherwise. The neck of the Galeru is very smooth and flexible. It doesn’t pull the cord in an unnatural way like some bungees do so it takes absolutely no time to get used to.

The Razer mouse bungee has a classic spring bungee design. The dimensions are 2.7 x 8.7 x 4.1 inches and it weighs 1.6 pounds. Bungees with a classic grip don’t need extra weight to be steady on the table. The design makes it have a very large anti-slip foot so you can be sure it won’t move from where you place it. The classic design is also very compact. You can place it basically anywhere on the desk for example under the monitor.

Although it’s a spring bungee it doesn’t have that unnatural pull which means the neck moves freely in each direction. It only has one flaw – the bungee won’t work with braided cords.

Well, you can jam them inside the groove but they will get destroyed which isn’t something you would want.

The Roccat Apuri also has a scorpion design but it also comes with a few extra functions. It has three blue LED’s on top and there’s an illuminated Roccat logo on the bottom. This gives it a very effective look in the dark. Besides its original function, it acts like a decoration or a small gaming lamp on your table. The Apuri also has 4 USB 2.0 ports and the hub itself is powered by an AC adapter. This feature makes life a lot easier. You don’t have to crawl under the table or walk away from the desk to get power for something.

The neck of the bungee is made out of rubber which allows smooth flexion in every direction giving you that wireless feeling. The head is also made of rubber which means every cord can fit into it thanks to its flexibility. The bungee is removable so if you don’t want to use it you can remove it and you’ll still have an illuminated USB hub. The weight of the mouse bungee is 1.5 pounds which are quite a lot and combined with the rubber feet it provides a lot of stability. It won’t move on the table unless you really want it to move.

The Meco mouse bungee has a simple design. Its clean look and the possibility to choose from 7 different colors makes it fit in any setup. The back-side of the bungee is also very low. That allows you to fit it basically anywhere. The bungee also has 3 rubber feet. That is a great feature because it sits stable on the desk.

A lot of bungees have 4 feet and most times they aren’t well balanced and you have to put things under the feet to keep it from wobbling.

The neck of the bungee is also well-designed as it doesn’t apply any noticeable extra drag on the mouse when it bends. The only downside of this bungee is that thinner cable slips out of it, but it’s easily fixable with a small piece of tape on the cable to make it thicker.

The Best Mouse bungees are usually overlooked when putting together a gaming setup but that’s not a wise decision when considering its low price. They give your game a lot of consistency by preventing cord snagging and it gives you that wireless feel. As shown before they also have decorative and other values besides their original function. This means there’s a mouse bungee for every gamer type. The only choice left is doing you want the standard version or you would like the one with a few extras. This is a personal yet easy question and everyone knows the answer for it themselves.

Scroll back to top